Guitarist Songwriter from the North East of England.
My first experience with music was listening to my grandfather who was a church organist. My favourite piece he played was Trumpet Voluntary by Henry Purcell, an English composer (1659 – 1695).  This inspired me to take piano lessons from a wonderful lady, Mrs Gelson, in Bedlington. Not only did she teach piano, she was also a vocal coach and taught me all about pitch and harmonies. This set me in great stead for my future musical journeys. However, as much as I enjoyed the piano, I knew it wasn’t really for me. One afternoon in 1971, I was sitting in a friends back kitchen and he had an LP on his record player, it was a compilation album with songs from the Move, Joe Cocker, Tucker Zimmerman and Procol Harem to name but a few. A song came on and I went “wow”. It was Tyrannosaurus Rex playing By the Light of a Magical Moon. The use of the guitar and vocal melodies just blew me away and not long after I was in McKay’s in Newcastle buying my first guitar. Other influences include: Paul Kossoff, Brian May, Joe Walsh, Don Felder, Dave Gilmour, Alex Lifeson, Brian Robertson, Scott Gorham, Mick Box, Laurie Wisefield and Chris Hayes. 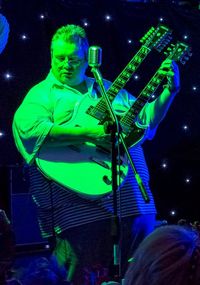 Past Bands
Raine / College Boys (circa 1978) Formed to initially play original music but morphed in to a covers band and we enjoyed minor success playing the North East club circuit.
ESP (circa 1985) again playing the North East club circuit, winning club band of the year in 1987. Which was also the year I married my beautiful wife Deborah.
Who Dares (circa 1989) was formed from the remnants of ESP when the drummer emigrated to Canada (nobody saw that coming!)
From 1991 to 2013 I was on an extended hiatus being a husband and father to my gorgeous wife and four fantastic children.
Room 602, Wishbone Ash Tribute band (2014)
Ashes to Ashes A tribute band playing Wishbone Ash covers
Scorched Earth Policy playing original compositions and distinctive rock covers.
Back